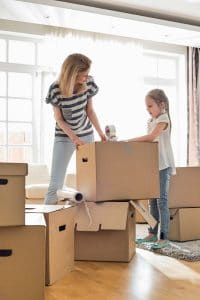 The saying that it’s a small world is truer now than ever before. Technology has made the globe seem a lot closer and much more accessible than it used to be. It’s caused many more people to satisfy their feelings of wanderlust. It’s also made it much easier to wrap your mind around moving across state or across country for relationships, new employment opportunities, or simply to start over.

When a relationship or marriage ending includes a child custody order being issued, moving can become a complicated, volatile issue. Whether or not you’re the custodial parent, there are always arguments on both sides that need to be resolved.

Why you should anticipate problems if one parent has to relocate

Whether you’re the parent intending to move or the parent staying put, you’ll each have similar concerns but from different perspectives, and for different reasons. Even if you have a somewhat amicable co-parenting relationship, a relocation can throw a wrench into everything making it tougher on everyone.

If you are the custodial parent and intend to move:

What steps do I need to take if I intend to move?

Tennessee law is pretty specific when it comes to parental relocation. When there’s a standing child custody order in place and one parent chooses to move more than 50 miles away or to another state, he or she is required to provide written notice to the other parent at least 60 days before moving.

In addition to stating that you intend to move, the notice should include:

If able, you and the other parent can agree to a new visitation schedule that makes reasonable sense for the distance and schedules you all have to navigate, or visitation can be modified by filing a petition. The court will take arrangements into consideration that suit all parties provided it still serves to foster a continued relationship with the other parent. In some cases this can mean increased electronic communication or exercising visitation in larger blocks of time such as extended holiday breaks or summer vacation.

If there is no agreement to allow the relocation, or if the other parent objects to the move, then the relocating parent MUST file a Petition seeking to alter visitation.

The court may deny a relocation request by a custodial parent for several reasons, including that the:

When life takes one coparent in a direction that requires a relocation, there are details that have to be sorted out either by agreement or through the court. Every family situation is different and will have a varied approach under the law for enforcing a custody order.

If you’re an East Tennessee parent facing life circumstances that can affect your child, you need to seek the experienced legal counsel of the Maryville family law attorneys at Shepherd & Long, P.C. Schedule your free consultation today by calling a member of our knowledgeable team at 865-982-8060, or by completing our contact form.