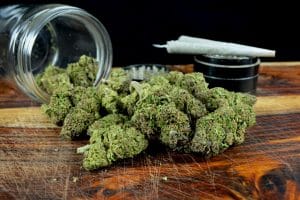 Five different states recently passed measures to legalize marijuana for recreational and/or medical use. This brings the total number of states that have reduced fines and penalties (or eliminated them outright) for the purchase and use of marijuana to 16.

Tennessee wasn’t one of those states. Marijuana is still illegal here. Thus, the questions remain: what happens if you’re caught buying or selling marijuana here, and where can you turn to get help?

How illegal is that joint?

Very illegal; this is one of the few states that doesn’t even have medical marijuana as an option, let alone recreational marijuana.

That said, the penalties aren’t as harsh as they would be for, say, heroin. All drugs in the United States are divided into “Schedules,” which detail the severity and control of a particular substance. For example, Schedule I drugs include heroin, cocaine, and most opioids. In the state of Tennessee, marijuana is the lowest ranked as Schedule VI. The consequences for selling and trafficking marijuana are, of course, more severe than for possession, but you could still find yourself in serious trouble over your evening toke.

A wide range of possible charges may be levied against you for the illegal use of marijuana in Tennessee, ranging from misdemeanor fines to 30 years in prison. It all depends on how you have interacted with the drug, and what a prosecutor is able to prove with regards to your intent in a court of law.

For using marijuana, you could face the following charges:

The more severe of these offenses come under the umbrella of “trafficking,” and the outcome is not as cut-and-dry. Selling can refer to anything from supplying your friend with an eighth to participation in a drug ring that crosses state lines. Intent to distribute may bring those fines up to $200,000 and prison time up to 60 years. The higher the quantity and the more organized the sales, the more severe the charges. This means that even as a “local” dealer, you could catch serious heat, both in the form of a longer prison sentence and much higher fines than for simple possession.

Whether you are accused of using or selling marijuana, a drug conviction can ruin your life. Even aside from the legal consequences, collateral issues can still cause serious trouble, from making it harder to find a job to losing your right to vote (in the case of felony charges).

To protect your rights following an accusation of drug use or trafficking, you will need a qualified lawyer. If you or someone you know is facing a drug crime conviction, please don’t hesitate to contact Maryville drug defense lawyers Shepherd & Long, P.C for the representation and justice you deserve. Call us at 865.982.8060 or contact us today.