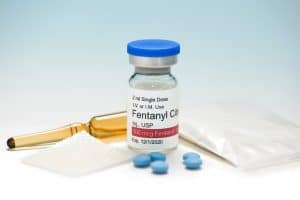 Each state in America has its own drug problems to deal with that are specific to their region. The same is true of Tennessee, and our great state is currently dealing with a heroin problem. Heroin on its own is a dangerous drug, but oftentimes it is unknowingly laced with another dangerous drug: fentanyl. While in the medical world it is used to treat severe pain, in the drug world, it is used to make other drugs far more potent. Because it is so potent and so dangerous a drug, the penalties for possessing and/or distributing the drug are often severe, resulting in hefty fines and years of jail time.

According to the Centers for Disease Control and Prevention, “fentanyl is a synthetic opioid that is up to 50 times stronger than heroin and 100 times stronger than morphine. It is a major contributor to fatal and nonfatal overdoses in the U.S.” There are two types of fentanyl: pharmaceutical and illicitly manufactured. While both are considered synthetic opioids, pharmaceutical fentanyl is prescribed to patients to help treat severe pain, usually associated with post-operative pain or pain from advanced-stage cancer.

Illicitly manufactured fentanyl, however, is the source for most of the fentanyl related overdoses, and is distributed through illegal drug markets, as people abuse it for its heroin-like effects. As fentanyl is extremely potent, it is often laced throughout other drugs as a cheap way to sell them. However, the fentanyl makes these drugs stronger, more addictive, and more dangerous to those who use them.

Illicitly manufactured fentanyl is usually in a liquid or powder form, and has the appearance of other illegal drugs such as cocaine and heroin. They have been known to be made into a pill form to look like prescription drugs. Fentanyl has been known to be found in eye drops, nasal spray, and even small candies.

In Tennessee where heroin has been on the rise, fentanyl is also becoming more widely and popularly used to lace heroin and other drugs. According to the Tennessee Bureau of Investigation (TBI),

A disturbing new discovery is compounding the problem of fighting drugs in Tennessee. Law enforcement agents recently recovered what appeared to be oxycodone pills during a traffic stop, with the same size, appearance and stamp of oxycodone. But a lab analysis determined these pills were counterfeit. They did not contain oxycodone, but instead contained fentanyl. The safety concern of this discovery is so great that the TBI issued a warning about this potentially dangerous drug recovery.

What are the possible penalties for fentanyl crimes in Maryville?

The immediate penalties are severe enough, but you must also consider the life-long consequences of a drug conviction on your criminal record as well:

What is Tennessee’s “death by distribution” law?

Tennessee SB1787, also called the Death By Distribution Law, makes it a criminal act for an individual to supply someone with drugs laced with fentanyl if that person fatally overdoses. The legislation passed in 2018, with an amendment in 2019 giving the state authority to pursue the death penalty in certain cases.

Do I need a lawyer for a fentanyl charge?

Felony charges are serious. Our drug crime defense attorneys will not only research every aspect of your case including all the charges against you, but we will dedicate ourselves to defending you. We want the best possible outcome for our clients. Kevin Shepherd began his career as an Assistant District Attorney, and later became an Assistant Public Defender, so our team understands how a drug conviction can affect your life in long lasting, sometimes permanent ways.

An attorney knows the complex and confusing jargon and ways of the legal process. As we have been attorneys for years, we know what works in court and what doesn’t work in court, and we will fight every step of the way so that you have the best chance of a lesser fine and lesser jail time.

Drugs are everywhere in our nation. Sometimes, they are obvious and sometimes they are not. With fentanyl, it can be laced into a completely different drug, and many people are unaware. In this instance not only is it an illegal drug, but also an extremely dangerous drug. If you have been charged with possession or distribution of fentanyl, then you need an experienced lawyer. We are dedicated to protecting your rights and your freedom. For more information, or to schedule a consultation with Shepherd & Long, P.C. call us at 865-982-8060 or fill out our contact form. We regularly represent clients in Maryville, Blount county, and throughout East Tennessee.