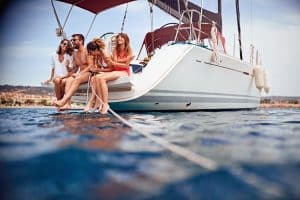 Summer in Tennessee brings thoughts of music festivals, barbeques, camping, and maybe escaping the heat with a cold beer on the boat. However, many residents may not realize that driving a water vehicle under the influence of alcohol or drugs is not only dangerous but also illegal, and a recent law now brings harsher penalties for a BUI (boating under the influence) charge.

In fact, the consequences of a BUI charge are now on par with DUI charges, and can have the same lasting effects on your life and future. Here’s what you need to know about BUIs and the penalties related to them.

What is considered Boating Under the Influence?

In Tennessee, a BUI is basically equivalent to a DUI and a person will be charged if they are operating a vessel with a Blood Alcohol Content (BAC) of 0.08 or higher or while under the influence of drugs. The law uses the word vessel in a very broad sense, any type of vehicle you could drive on the water is subject to this law. This includes boats as well as personal watercraft like jet skis, but does not include non-motorized crafts such as a kayak or paddleboard.

How is the law enforced?

Tennessee waterways are protected by the Tennessee Wildlife Resources Agency (TWRA) as well as the United States Coast Guard (USCG), and officers of either agency can approach vessel drivers they suspect of boating under the influence of drugs or alcohol. It is important to keep in mind that in Tennessee, an incident does not have to occur for an officer to request a person submit to sobriety tests; by operating a vessel, individuals have given their “implied consent to chemical tests to determine the alcohol or drug content of their blood.”

While a person can refuse a field sobriety test (things like the one-legged stand test) or a breath test, if an officer secures a warrant for a blood test, it cannot legally be refused. This does not happen often, but it may if a person ends up in a hospital after a crash or because of alcohol poisoning.

What are the penalties of being convicted of a BUI?

Penalties for a BUI conviction are similar to a DUI and vary based on the specific situation in question. If a person is convicted of a BUI, penalties typically involve a monetary fine, jail time, and the suspension of a boating license for a certain length of time. Specifically:

Additionally, if the BUI comes from the United States Coast Guard, federal convictions and penalties may also occur.

More importantly, if a BUI conviction is due to an accident in a water vessel, restitution will be required for any lost property and a person can be charged with vehicular assault or vehicular homicide if injury or death of another person occurs. Clearly, just like a DUI, a BUI conviction can have a significant and lasting effect on your life. So…

…how can a person avoid a BUI conviction while still enjoying a day out on the water?

First and foremost, always have a designated driver for any motor vehicle – both on land and on the water. The new laws do not make it illegal to have or drink alcohol on a vessel and only apply when the vessel is moving (not docked or anchored). So the best way to avoid a BUI – and any other potentially dangerous situation – is to be sure the person driving the vessel remains sober while the vessel is away from land.

What are the dangers of Boating Under the Influence?

Aside from being illegal, Boating Under the Influence of drugs or alcohol is extremely dangerous, possibly even more dangerous than Driving Under the Influence. According to the United States Coast Guard, boating factors such as “motion, vibration, engine noise, sun, wind, and spray accelerates a drinker’s impairment.”

Additionally, the Coast Guard says that most people who drive a boat only do so for 110 hours per year on average, making them less comfortable and confident than road drivers, even under ideal conditions. All of these factors together make Boating Under the Influence extremely dangerous – in fact, alcohol is involved in about a third of boating fatalities. The best way to avoid dangerous situations while out on the water is to have a designated driver who will remain sober and in control during the duration of your trip, or to keep your vehicle parked at the dock while consuming any alcohol.

At Shepherd & Long, we understand that mistakes happen to everyone, and we don’t think your mistakes should ruin the rest of your life. Boating Under the Influence, like driving under the influence, is a serious charge with serious consequences. By working with experienced attorneys, we can help with the finer points of an extremely vague law, and protect your future from the harshest penalties.

If you are facing BUI charges in Maryville, Blount County, or anywhere in East Tennessee, you need an experienced criminal defense lawyer on your side. Call the office of Shepherd & Long at 865-982-8060, or submit our contact form to schedule a consultation today.